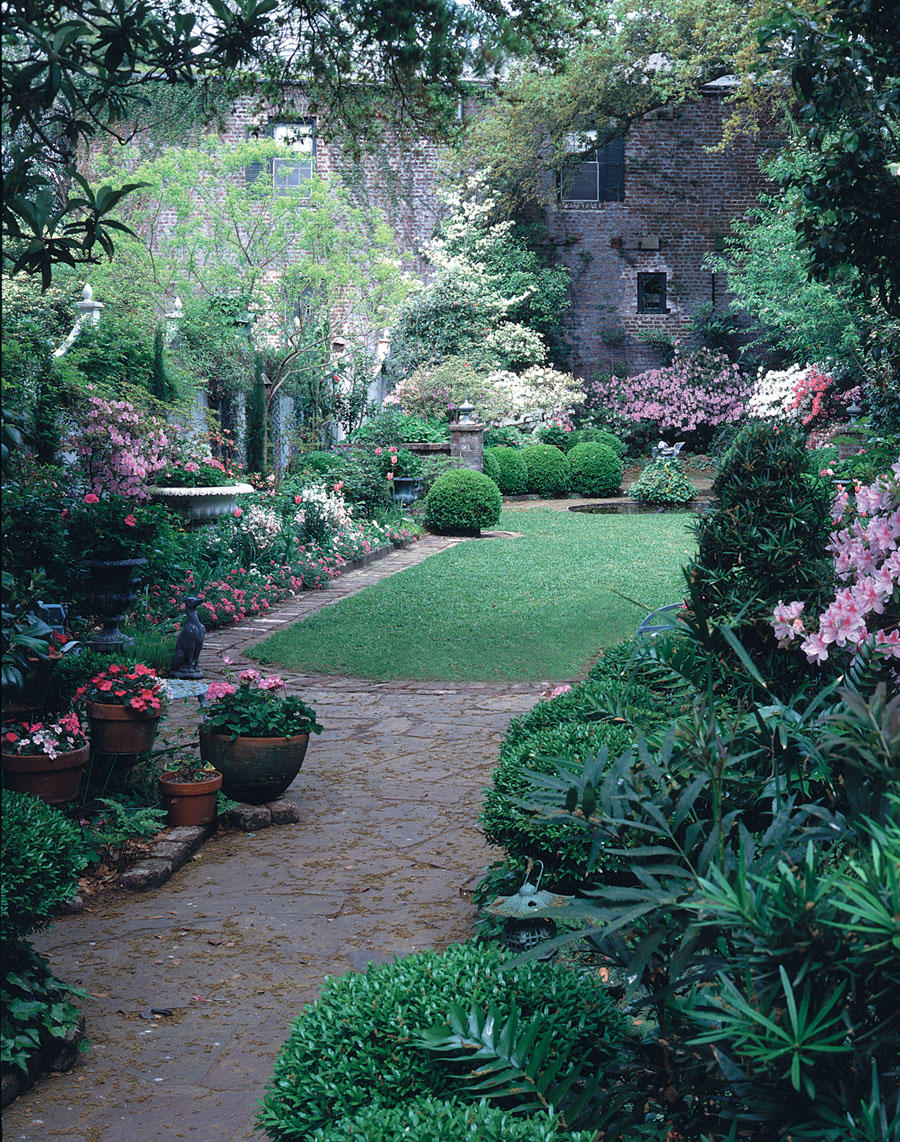 Will you follow the Camino de Santiago (Way of St. James) across northern Spain, a route walked by millions of pilgrims since the Middle Ages, and who, even today, make the journey on foot, or by bicycle or even on the back of a mule? Are you one of the legions of Elvis fans across the world who make the annual pilgrimage to Graceland in Memphis?

For gardeners, Charleston, known as “a city set in a garden” is Mecca – the ultimate destination for gardeners. For me, within this Celestial City of Southern Gardens, my own Mecca remains steadfast: Mrs. Whaley’s Charleston garden on Church Street.

It was early on a Sunday morning and the garden wasn’t open to the public the first time I made it there. But we were heading back to Atlanta and I could not/would not leave Charleston without making an attempt to see one of the most visited private gardens in America.

Like many of the gates and fences standing sentinel at the gardens of Charleston, the grillwork here was fashioned in black wrought-iron; a flirtatious Southern belle offering just a glimpse of a well-turned ankle. It was a charming gate, but still, it was keeping me outside of this particular Eden and I wanted to see more. Was that pittosporum (Pittosporum tobira) around the corner? I fancied that I caught a whiff of Confederate jasmine. Perhaps that sweet scent was a tea olive (Osmanthus fragrans)? Somewhere nearby a church bell was chiming. 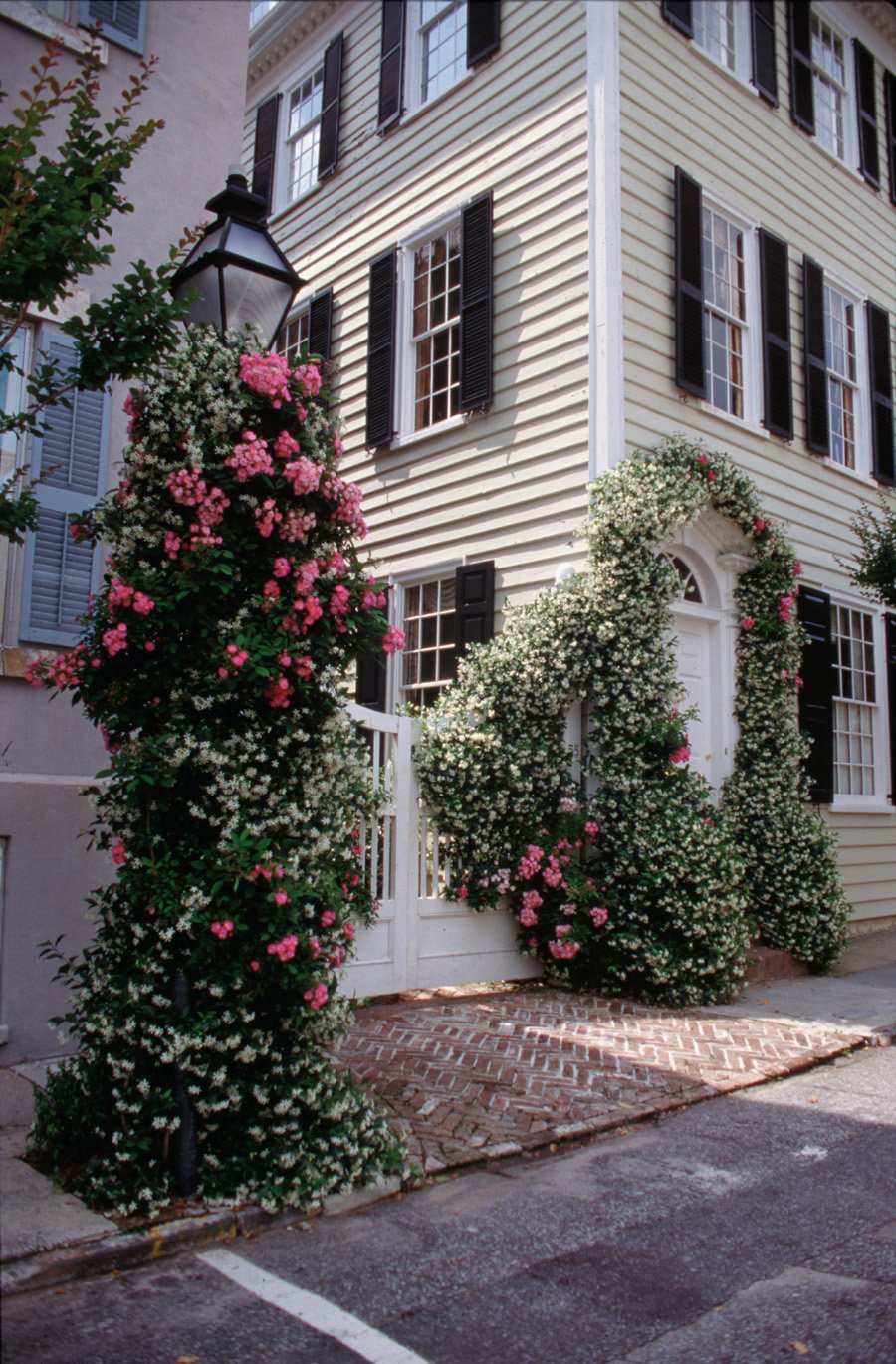 The current occupants of the house were undoubtedly enjoying a leisurely second cup of coffee, lingering over the Sunday paper, oblivious to this strangers lurking just outside. But I was determined to catch a peek at the masterpiece the late Emily Whaley created, based on the plan originally drawn up for her in 1940 by Mr. Loutrel Briggs, the renowned landscape architect who designed many of the wonderful gardens in Charleston.

Alas, my traveling companion was tugging on my arm, mumbling about trespassing on private property, and I was forced to retreat with only a hasty look at my Holy Grail of Charleston’s gardens. In my mind I was not trespassing. After all, when your garden is the title of a book – “Mrs. Whaley and Her Charleston Garden,” by Emily Whaley in conversation with William Baldwin — as well as the subject of numerous magazine and newspaper articles and has even appeared on the cover of the Charleston telephone book, it’s inevitable that stray gardener pilgrims will pop up from time to time.

Luckily for me (and everyone else), during the Historic Charleston Foundation’s Annual Festival of Houses and Gardens, owners of the private gardens in the Historic District of Charleston graciously open their signature wrought-iron garden gates – and in many cases their front doors – to welcome visitors. During the month-long celebration, daily tours feature the interiors and gardens of nearly 150 historic private houses in 12 colonial and antebellum neighborhoods during the peak of the city’s blooming season.

I have visited Mrs. Whaley’s garden several times – legitimately, courtesy of events like these in Charleston – and I am always inspired and always vow to return. After all, inspiration is what we’re all searching for, in one form or another.
The late Emily Whaley said it best: “Inspiration is the bottom line. Without it the first move could not be made. . . . We see, absorb, winnow, and sift, and finally our imaginations take wing and out of all this come our gardening plans.”